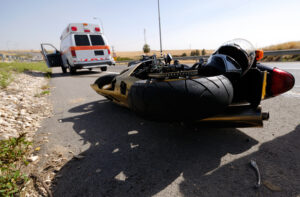 Are you really more at risk of an accident while riding a motorcycle than while driving in a car? Your mom would say yes, but what do the facts say?

So, you while you might be more likely to be injured while riding a motorcycle than a car, the causes of the accidents might be surprising. When it comes to common causes of motorcycle accidents, there are some popular myths that need to be debunked.

Myth #1: Cars Cause All the Accidents

Many people might think that cars are responsible for the large majority of motorcycle accidents. But CrashStats, debunks this. In fact, motorcycles are more frequently involved in fatal collisions with fixed objects than with other vehicles. In 2013, 22 percent of the motorcycles involved in fatal crashes collided with fixed objects, compared to 18 percent for passenger cars, 14 percent for light trucks, and 4 percent for large trucks. CrashStats also reports another potentially surprisingly stat: In two-vehicle crashes, 74 percent of the motorcycles involved in motor vehicle traffic crashes were frontal collisions. Only 6 percent were struck in the rear.

Myth #2: Riders are Never to Blame

On the contrary, data shows that many accidents are the result of preventable rider negligence. In 2015, the NHTSA reported that 33 percent of riders killed were a “direct result” of the rider speeding. About 40 percent of the riders killed in 2015 were not wearing a helmet. And it also tends to be the case that riders who had a blood alcohol content level in excess of the legal limit also made up a large chunk of the total rider fatalities – especially in states like Texas, Florida, and California, and here  in New Mexico, where the weather encourages riding year-round.

The statistics point to a number of proactive steps that riders can take to help decrease their risk of injuries. Steps like:

What If You’re Involved in an Accident?

If you choose to cruise the highways on a motorcycle, take initiative to be a safe and responsible rider. Be aware of the potential injuries you could sustain from an accident – even if the accident isn’t your fault. It’s also important to remember that no matter who’s at fault in an accident, it’s likely that the motorcyclist will sustain the more serious injuries. But that doesn’t mean you can’t get justice for your case! If you’re involved in a motorcycle accident, remember that you might be entitled to significant compensation. It’s time to get an experienced personal injury and motorcycle accident attorney on your side. Call us at 505.764.9710 or send us a message online.

Ask Brian Your Questions Contact Us for a FREE Consultation